More Flow Thanks to the Red Bull DIY-Project 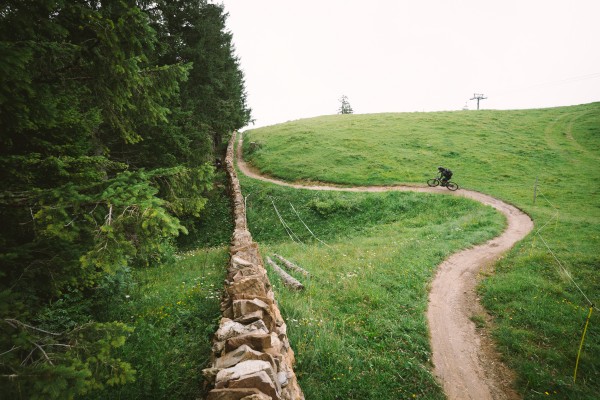 René Wildhaber looks back on his bike season 2021 and thus also on the second edition of his Build and Ride project “Red Bull DIY”. The new trail section on the RedFox at BikerBerg Flumserberg, built with the help of four bike enthusiasts and the BikerCrew Flumserberg, was opened just in time for the annual Flumserberg BikerFestival.

BikerBerg co-developer and long-time bike racer, René Wildhaber, is a passionate trail builder and prefers to work with like-minded people. For this reason, he has continued his “Red Bull DIY” project at BikerBerg Flumserberg, which he launched in summer 2020. Together with four selected bike enthusiasts and the BikerCrew Flumserberg, he revised a section on the BikerTrail RedFox. The new section of the trail was opened to all bikers at the Flumserberg Biker Festival at the end of August this year.

The RedFox goes "more with the flow"

After the ascent with a 8-seater chairlift, the BikerTrail RedFox starts on the Prodkamm at 1939 m. The moderately difficult BikerTrail meanders over 3.5 km with lots of flow, with idyllic breathtaking, apline views of the Churfirsten mountain range and Lake Walen down to Prodalp at 1576 m. "A beautiful, harmonious descent - only the short pedaling section in the last third was always a flow killer," explains René Wildhaber, adding, "this is exactly where we revised the trail with the" Red Bull DIY "project." Instead of pedaling, the bikers can use the terrain more optimally to jump over waves with momentum and roll over the new bridge.

The “Red Bull DIY” crew in 2021 consisted of four selected bike enthusiasts who implemented the construction project under the direction of René Wildhaber and the energetic and material support of the mountain railways Flumserberg's biker crew. A 14 m long wooden bridge was built with heavy tree trunks and numerous boards, thus aligning the route in a straight line. In order to further increase the fun factor, better use was made of the existing terrain contours when approaching the new bridge. This resulted in several cracks and the historic dry stone wall remained intact. The construction days also challenged the crew due to the different weather conditions. The first day of construction was very cold and wet, the last very hot and sunny. The construction result is convincing and has already given many bikers pleasure.

The regional mountain bike specialist BikerNetzwerk, represented by Roger Walser and Dave Spielmann for the Swiss MTB interest group IMBA Switzerland, supported the “Red Bull DIY” project and were there on the kick-off day.

Photo 1: A bridge in this section provides more flow.

Photo 2:  Material support of the BikerCrew.

Photo 3: Heavy tree trunks as the base of the bridge.

Photo 5: The bridge being built.

Photo 6: Opening of the new section at the Flumserberg Biker Festival.

Photo 7: René Wildhaber on the RedFox on BikerBerg Flumserberg.