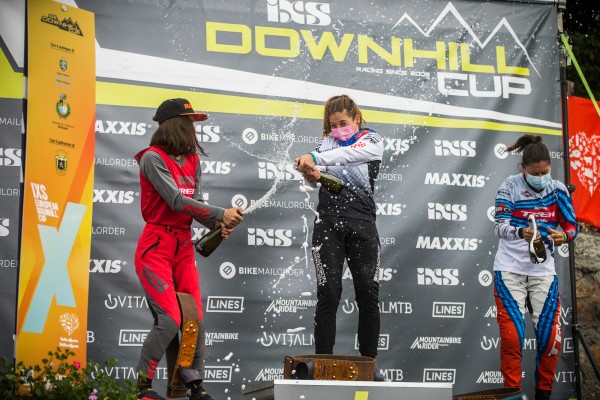 The iXS European Downhill Cup delivered another highlight of the season with its second race last weekend. In the end, Tuhoto-Ariki Pene and Veronika Widmann were able to take home the victories of the elite classes.

It's mid-July, summer feels pretty normal so far in most European countries, and the iXS European Downhill Cup is running as planned. The second race was able to attract a top-class field of participants to Pila in Italy. Almost 300 riders from 27 different countries were keen to battle it out on this amazing racetrack, guaranteeing top-tier competition.

As always, the organizers of the race spared no effort and prepared an event suitable for the occasion. This former World Cup track promised a downhill spectacle, and with great attention to detail and a location high up in Aosta Valley, it can't be beat as a premier racetrack. Also, not to be forgotten and the quintessential "cherry on top", is the incredible mountain panorama, which offers a unique view of the Monterosa, Matterhorn, and as far out to Mont Blanc. The course has a length of 2,700 meters and decreases 460 meters in altitude from start to finish. Many high-speed sections alternate from roots to stone passages, and a super steep section is in the midst of it all, which Pila is infamous for.

In the past, the downhill legend Corrado Herin, who unfortunately died in an accident, was responsible for building the track, but his successors have proved to uphold and honor his quality standards. There was even a new section for this year's race, which was seamlessly integrated into the characteristics of the former World Cup slope and thus exactly met the expectations from the field of participants.

As usual, Friday was open for track walks and official training. After getting an initial impression by foot and making decisions regarding the line choice, the riders had six hours to check the practicality of their selected lines and, if necessary, readjust them at one section or another. With the best summer conditions, the athletes reeled off their training runs and were therefore optimally prepared for the following days of competition.

On Saturday morning, a few more hours of training time were slotted. Then in the afternoon, things got serious with the beginning of qualification. For most of the classes, it was a seeding run that not only determined the starting order for the finals, but also provided points for the overall standings. For the Elite Men class, however, the seeding run proved to be of much more importance as the Super Final would be held in the European Cup on Sunday, and only those who qualified among the 30 best would have the chance of winning the race. For quite a long time, a small uneasiness seemed to be looming among the men, because New Zealander Tuhoto-Ariki Pene (The Union) held the best time for half an eternity. Only the last rider, Matt Walker (GBR - Madison Saracen Factory Team), was faster and secured himself a remarkable time of 3:35.843 minutes, with a lead of 4.3 seconds. The fastest in the Elite Women class was his Italian team-mate Veronika Widmann, who was barely able to beat the time set by Izabela Yankova (BUL - Riders United).

Sunday started again with optimal conditions. However, one of the most burning questions was whether or not the weather would hold, as rain and even possibly thunderstorms were forecasted. Typically the races start with the Pro Masters. Benjamin Herold (GER - TNT Racing) won against Paolo Alleva (ITA - Scoutbike.com) and Luis Ribeiro (POR - Justbikes).

Next on the track were the youngest participants in the U17 class. Mike Huter (SUI - Gamux Factory Racing), winner of the series' opener, was unfortunately unable to take part due to an injury, and so Henri Kiefer (GER) started the race as the favorite. In the qualification, Kiefer was able to dominate the field, but unfortunately could not hold his leading position in the final and ended up getting knocked out of the winning standings. The winner of the race was Christian Hauser (ITA - 3stars-Alessibici), who was able to put himself in a good position for the series classification with this win, along with his fifth place win in Brandnertal. Trailing seven seconds behind was second place winner, Samu Kauppinen (FIN - Pyorahuolto.com) followed closely by Rudi Eichhorn (GBR - Canyon Collective FMD).

The next class was the Elite Women which, with 27 participants, was well staffed in terms of quantity and quality. A rather unknown rider was able to draw attention to herself the day before. The Enduro World Series participant Rae Morrison (NZL - Liv Racing) held the best time in the qualification for a long time and impressively showed that she would be a serious contender for the podium. In the final run, she placed third from last on the course and only lined up behind Alia Marcellini (ITA - ASD Camping Arizona).

Then Izabela Yankova crossed the finish line, unable to beat the time from the day prior, but still ten seconds faster than the woman in the hot seat. Now only Veronika Widmann was left to race, who luckily had a lead of around five seconds. Now all Widmann had to do was make it to the finish line to turn her dominance of the weekend into victory. In the end, the South Tyrolean actually crossed the finish line with a time of 4:02.420 minutes, an impressive gap of nine seconds ahead. The race finished with Widmann ahead of Yankova and Marcellini.

Now the U19 riders went on the course and, with luck, the conditions remained optimal. The best time in qualification was already in the top 5 of the Elite Men class, which impressively showcased the level of performance and talent within the junior category. Almost 50 competitors fought for the day's victory. Especially for this age group, the series represents the ideal springboard for furthering a career in downhill sports, which comes to no surprise as you have to assert yourself against international competition on courses with World Cup standards. Such a race series can create and affirm the necessary self-confidence, which cannot be lacking when competing against the elite. In the end and in the blink of an eye, Luis Kiefer (GER) secured victory with 3:53.635 minutes, just ahead of Davide Cappello (ITA - ASD After Skull) who was fastest the day before. Third was Lachlan Stevens-McNab (NZL) as the weather slowly changed and the track gradually became wet.

Now it was the time for the Elite Men Super Finals. This became a bit more challenging due to rain, proving to hinder speed and increase times in comparison to times clocked on the previous day. First, Yannick Baechler (SUI - Baechler Brothers) set a time of 3:51.901 minutes, which positioned him in the first-place hot seat for a good part of the finals. Finally after eight riders later, Luke Meier-Smith (AUS - Propain Factory Racing) was able to undercut Baechler. The next riders, Davide Palazzari (ITA - Rogue Racing After Skull) and Noel Niederberger (SUI - Privateer Powered by Bike Tech), could not intervene, and then it was left to Onni Rainio (FIN - Saracen SportSource), Tuhoto-Ariki Pene and Matt Walker to attempt to steal the win. In the meantime, everyone was within striking distance, with Pene and Walker even being able to pull out a lead. The Finn lined up four tenths of a second behind Maier-Smith. Then Pene came in, flying over the finish jump and the scoreboard showed a lead of three seconds. In the end, all eyes were on Walker again.

The fastest qualifier crossed the finish line just under four seconds behind and thus the New Zealander won the race in his second elite year with a time of 3:45.072 minutes. The former New Zealand junior champion should have another fond memory of Italy as, after all, he won the World Cup in Val di Sole as a junior in 2019. Matt Walker came second, followed by Meier-Smith, while the five-man podium was completed by Rainio and Baechler.

Pila once again delivered a worthy stop at the iXS European Downhill Cup and was able to do excellent advertising for the region. In addition to the downhill track, there are numerous other mountain bike offers there and it is always a pleasure to see the dedication for events that are organized there. The next round will be the third run and is taking place in Maribor, Slovenia, which is also used by many as preparation for the European Championship and the subsequent World Cup that takes place immediately after. Some of the greats of the world's elite are already on the list of participants.