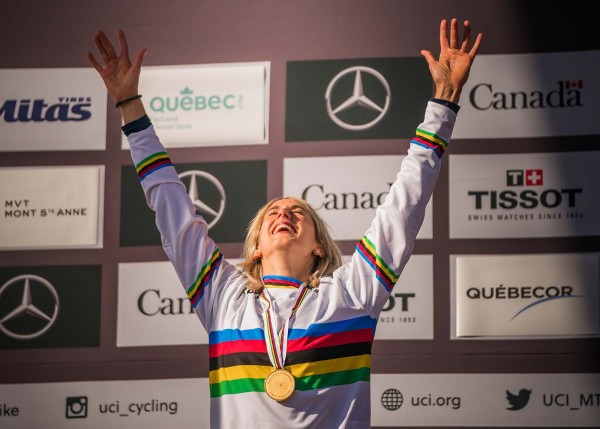 After 5 months working super hard to come back, Myriam Nicole did what her surgeon thought what was impossible to do on time: she rode again and better than that, she became the new WORLD CHAMPION! With a silver medal for injury comeback Tahnee Seagrave and bronze for French team mate Marine Cabirou completeing the podium.

Amaury Pierron got his first ever medal in a World Championship, he finished 3rd! In an epic battle for the tops spots on beaten by Austrialian Troy Brosnan and now four times World Champion Loic Bruni. He was disappointed because he made two big mistakes but a medal is still really good and the season isn't over yet! With only 91 point behind Loic Bruni in the overall World Cup, Amaury still has a shot on the Overall title in Snowshoe USA in a week.

Thibaut Daprela was having a great run but his derailler got caught by something and his chain came off, he finished 5th! And can close his second Junior season next week, without pressure, as he won the overall allready. Rémi Thirion took all the lines he wanted but missed some speed and ended up 19th!

THANK YOU TO ALL TEAM COMMENCAL/VALLNORD FOR AN EPIC WORLD CHAMPS WEEKEND!